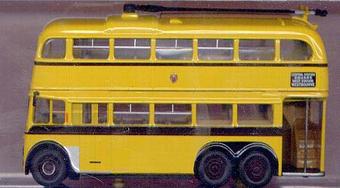 The first 3-axled BUT 9641T trolleybuses were delivered to Bournemouth in October 1950. These handsome machines used an MCW body very similar in style to the London Transport Q1. With a front and rear staircase and front air-operated two-leaf folding door, they ewere designed for quick loading and unloading. Our model depicts the front doors using the tampoo printing process. A total of 24 vehicles were delivered, each seating 56 passengers but Nos.234-243 had the front staircase removed in 1962/3 to increase the seating capacity to 68. The bulk were disposed of in December 1966 to scrap dealer Wombwell Diesels for just £75 each. Fortunately, 246 was saved for preservation and is stored in Bournemouth. Our model is KLJ 340, fleet number 240, one of the modified vehicles distinguished by the additional lower deck window behind the driver.