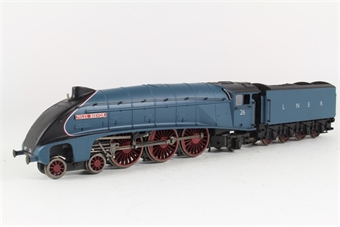 No other engine has created the impression of speed more than Gresley's A4 Pacific, for a new locomotive, both its appearance and performance were unmatched in this country. Within five weeks of its emergence from Doncaster Works in 1935, the first of the Class No.2509 Silver Link, spent 2 weeks hauling the 'Silver Jubilee' on a daily return journey, with no relief, as a second engine was not ready. The duty entailed a 232 mile, non-stop run each day, at an average speed of 70 mph. The capable speed of this class first hit the headlines during Silver Jubilee year, when Silver Link, on its trail trip for the press, ran 55 miles at an average speed of 100 mph. Mallard, No. 4468, took this further, for on July 3rd 1938, during brake trails, she acheived a world speed record for a steam locomotive at a speed of 126 mph, and on doing so, melted all the bearing metal in her middle big-end. The class consisted of a total of 35 engines, with the first four having the word 'Silver' included in their name. These locomotives were a unigue development of the earlier Class A3, but having higher boilers and reduced cylinders. Outward changes made to the A4, other than the addition of a double chimney and three variations of tender, was the removal of the valances, this was for lubrication purposes, due to restrictions created by the black out in WWII. The valances were subsequently never refitted. Having reached their pinnacle of acheivement of a distinguished career, the class generally proved their competence on all types of duty, from mundane freight haulage to running the 'Flying Scotsman' with loads of some 550 tons between London and Grantham on an even dialy time. So popular was this class, no fewer than six are preserved, some can still be seen on various BR 'Steam Specials'. 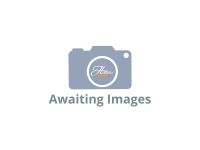