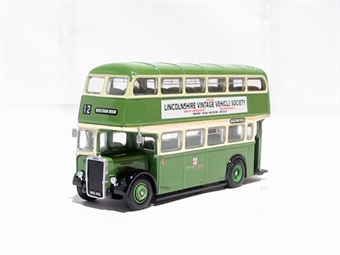 New tooling Lincoln Corporation purchased the very first Leyland Titan in 1927 and continued to buy Titans until 1968. This Leyland PD2/41 was one of four 7’6” wide Titans with Roe 61 seat bodywork supplied to Lincoln Corporation in 1961. All four (88-91) were delivered in the ‘wrong’ shade of green, utilising Leeds City Transport light green rather than Lincoln’s usual shade. No.89 was the last open platform bus to operate in passenger service with the undertaking in 1977 and is now preserved at the Lincolnshire Road Transport Museum in its later 1960s livery. The LVVS advert was actually worn by No.91 in the late 60s. 50% of the models produced will carry the destination 12 Boultham Moor and 50% will carry the destination 2 West Parade.
Product Era(s)