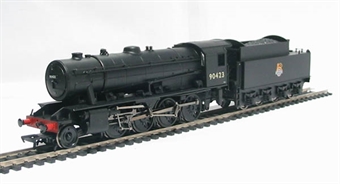 June 6, 1944 witnessed the Allied invasion of Occupied Europe - code named Operation Overlord, this major event in World War II history, placed a great strain on the Railway Companies. The logistics of this massive military operation called for the shipping of steam locomotives to Europe, for use on munitions and troop trains, to replace continental engines devastated by bombardment or sabotage. As a chronic shortage of suitable locomotives existed, R A Riddles, then Director of Transportation at the Ministry of Supply, had the foresight to realise that vast numbers of purpose-built heavy freight locomotives would have to be designed and constructed quickly. The criteria would be the speed and simplicity of the locomotives' engineering build, with emphasis being placed on ease of production. Stanier's Class 8F 2-8-0 was already in War Department service, but considerable manpower was needed to build each one, plus 16 tons of forgings and 17 tons of steel castings at a time when such raw material was desperately needed in armaments for the proposed invasion. A 'value engineering' analysis was undertaken for a new heavy locomotive specification based on the 8F, and the first WD 2-8-0 had to be capable of handling 1000 ton trains at 40mph! The simplicity of its construction reduced the labour content by around 20%. In total, 935 were built, their reliability despite inferior maintenance conditions, use of poor grade fuel, ability to withstand general abuse and low speed capability were the criteria for a locomotive operating in a war zone. On the minus side, their rough riding qualities made them unpopular with the crews. They earned themselves the nickname "Bed Irons" as the result of loud clanking noises emitted from their motion, a sound that train-spotters of the day still recall. Despite their original purpose, a considerable number of 2-8-0's never saw wartime service, and the LNER absorbed many, which became designated Class 07.