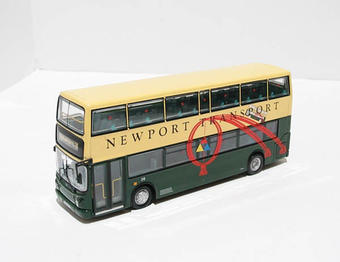 Stock Details
RRP: £30
Is this item actually in stock? No, this item has sold out.

Six ALX 400/Dennis Trident 2 double-deck buses entered service with Newport Transport in January 2000. These were the first ever Dennis chassis in the Newport fleet and are used predominantly on Service 30 between Newport and Cardiff. The striking graphic design was chosen following a competition among local art students. The design is based on a steel sculpture known as the 'Newport Wave' which stands on a bank of the river Usk in the city centre. The sculpture which is over 15m in height and has become a local landmark, represents Newport's links with the steel making industry and the sea. The Tridents have since been joined by 11 ALX 200/Dennis Darts in the Newport Fleet which still remains largely Scania based.