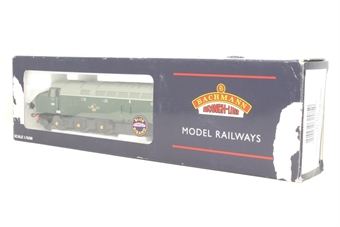 The Class 40 (or 'Forties') may be regarded as the first successful British main line diesel locomotive. Originally designated Type 4 the original order consisted of a fleet of ten 2000 bhp express locomotives by the BTC under the Modernisation Plan. Two hundred locomotives were subsequently constructed between 1958 and 1962 numbered in the range D200 - D399. The Class was divided in allocation between the Eastern, London, Midland and Scottish Regions, the distinctive 1Co-Co1 wheel arrangement giving high route availability. Their genesis, in terms of mechanical function (but not external appearance), can be traced to the 10000-10001 early diesels of BR (LMR) and 10201-10203 of BR(SR), in latter in particular. All, with the exception of twenty, saw construction at English Electric Vulcan foundry in Newton-le-Willows. Twenty-five of the Class received names. Numbers D200-D323 has train identification discs fitted; corner route-indicator boxes superseded this, which displayed a 4-character reporting system. In early 1961, when nose doors became obsolete D346-D399 had single, centre-mounted route indicator boxes at the time of construction. The Forties were especially well-liked machines with their crews and enthusiasts alike, remaining in service until obsolescence in 1985. Several examples of the Class have escaped scrapping by private enthusiast groups.
This model does not have any lighting fitted.