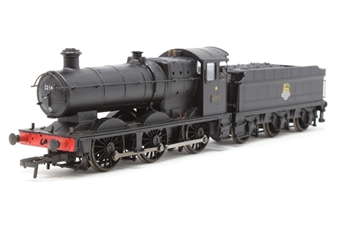 Stock Details
Is this item actually in stock? Yes
1 in stock.

Often called the Collet Goods, the 2251 Class 0-6-0 was introduced in 1930 by C.B.Collet to improve the GWR veteran fleet of 0-6-0 locomotives. In all, eight batches were built and the Class eventually totalled one hundred and twenty locomotives, with the final two being completed after nationalisation in 1948. The lively Collet's were able to handle light passenger trains at speeds of over 60mph, and proved to be versatile, popular locomotives eit good steaming capability. Despite their unofficial title 'Collet Goods', they were designed as general purpose locomotives for light traffic on either branch or main lines, as well as undertaking atation pilot and bankimg duties. As a result of it's low axle weight loading, the Class carried the 'Yellow' route spot, which gave them almost universal route availability over the GWR network. Although only previuosly fitted to 0-6-0 locomotives during overhauls, the Collet's were the first of the 0-6-0 arrangement to be designed around the standard No. 10 boiler. They were also fitted with generously proportioned cabs, with side windows and plenty of protection from the elements, which proved popular with their cab crews, as they were great improvements when compared against the small cabs fitted on the Dean Goods previously. Initially painted black in BR ownership, after 1957 a great number of these engines were painted in the fully standard passenger green livery of BR, which Swindon works re-introduced for the final years of steam. The livery was applied to a veriety of types of locomotives whether or not they were intended for mainline passenger duties. From the one hundred and twenty locomotives built, only one survived, No. 3205 is currently preserved on the West Somerset Railway.

Ask a question about this product