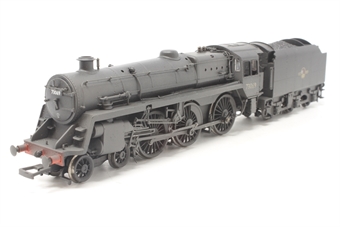 The new Standard 5 Loco's are being delivered with a plastic box like accessory. This black box is only used when the Loco is being fitted for DCC operation. It acts as an insulator between the digital chip and the Loco chassis.

Built under the direction of R A Riddles, the first of the British Railways Standard Class 5's, numbered 73000, appeared from Derby works on its completion in April 1951. It was to immediately take its place on display in the British Transport Commission Exhibition held in Marleybone Station, London in black lined out mixed traffic livery.

The design of the 5MT was based closely on the LMS Stanier locomotive of the same power classification, and incorporated the same tried and tested boiler with the exception of BR fittings being used. A total of 172 engines were built between 1951 and 1957, the Class being perhaps the mostly widely distributed of all Standard classes, being allocated to every region of the BR network. Several varieties of tenders were linked to the Class 5's to meet the varied needs of each region. Other minor design changes are also noticeable in service, such as the relocation of the chime whistle from behind the chimney to the top of the firebox, and fluted coupling rods being discontinued. The most significant engineering innovation was the use of the Caprotti valves and gear on thirty engines, which proved to be mechanically more efficient than piston valves.